One of the first concerns when there is a group of people inhabiting a piece of land is waste. What on earth are we to do with it?

Here at Bodenham Manor (the site for Building Man 2013), there is a multi-layered waste issue. In fact, not only is it multi-layered it is stacked sky-high! The issue here has not only been what to do with the waste we produce whilst we’re here, but also what to do with the piles of junk that were here before we arrived; the mounds of in-organic waste from fridges, to tyres, to TV monitors and even missile heads (yes, really), that have been mindlessly tipped across the site…

This land, with its chequered history and desecration is in serious need of some healing. I found the group response to the piles of rubbish a poetic and beautiful response. Each piece of waste here is given deep consideration and attention. Here I have witnessed such meticulous, tender treatment of rubbish… 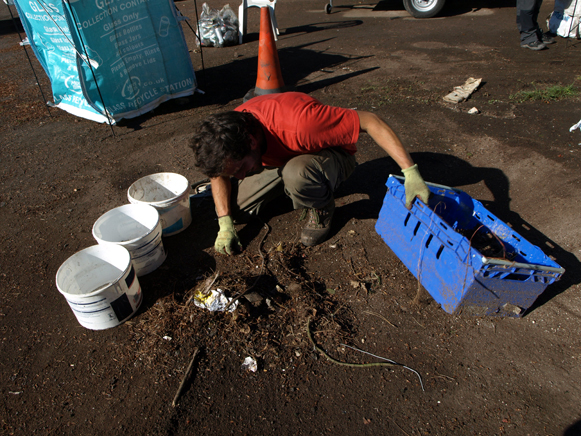 Not only was everything divided into respective categories: organic matter, scrap, recycling, re-usable, but it is being done with a sense of excitement and reverence… Cries of “Wow! Have you seen this???? What can we use it for”, patient hands sifting through clumps of mud and roots for tiny scraps of plastic, teams of folk dragging 50 mattresses up and down slopes, people piling tyres to create magical spaces, landfill-fabric being transformed into festival bunting, and the “Gallerie Extraordinaire” which featured some of the most interesting and intriguing finds from the site. 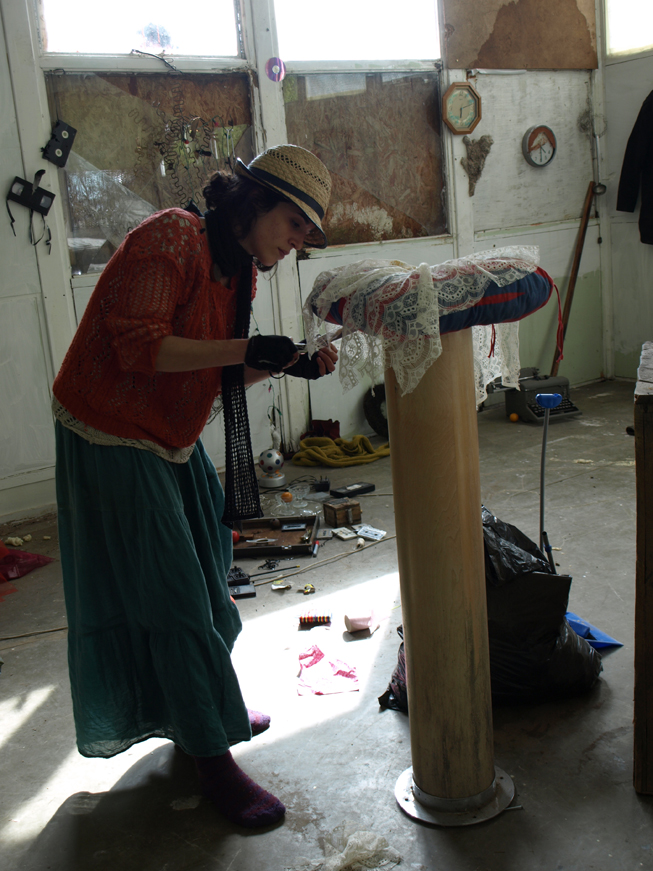 They made £406 at the scrap yard, but apart from that, the 3 weeks spent clearing and sorting, simply for the love of planet and the loathe of landfill should be an example to us all. In essence, what we don’t deal with directly ends up in an eternal pile of rubbish, blighting the land with our lack of consideration. Put it this way, if everything we put in our wheelie bin was instead piled directly in our own garden or living space, would we be as reckless about what we throw away, or would we give it, maybe just a little bit more thought?

What is our relationship with waste? How do we feel about dealing with our shit? Or other peoples shit? There seems to me a prevalent story of out-of-site, out-of-mind. Pete and I always have a good laugh whenever we get to a community, because so far, without fail, Pete has ended up building either a composting system or a compost toilet. It is a humbling, honourable, and arguably sacred job, and ultimately, someone has to do it. I believe that our relationship with our waste goes beyond our recycling bin, and whether we flush the chain after we’ve been for a wee. 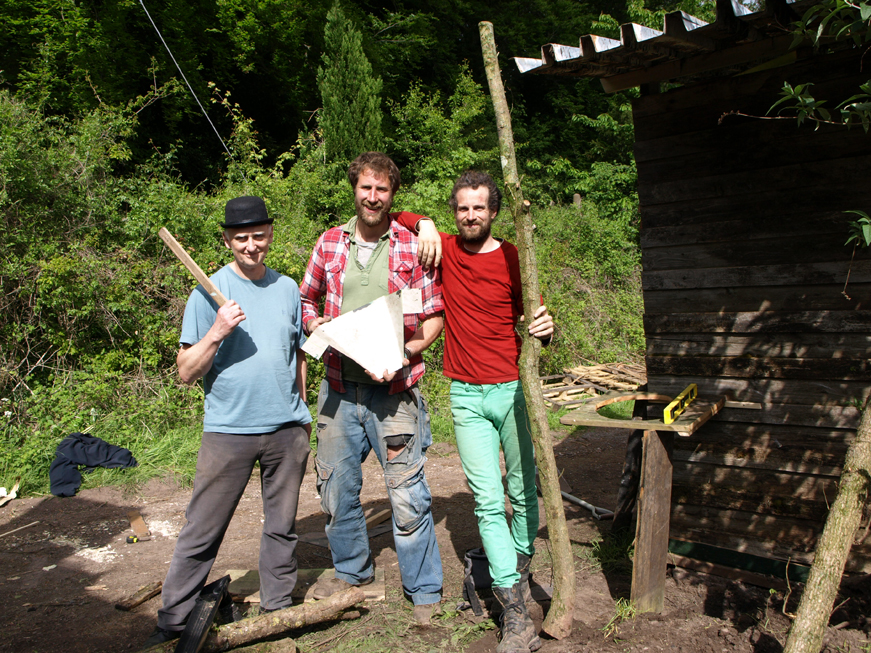 Human waste, for a start belongs back in the ground, completing a natural cycle. For anyone who hasn’t tried it, go for a poo in a compost loo, preferably with a view, and tell me there’s not something sweetly satisfying about knowing it is going back to source. Fruit trees love Humanure. Human urine is one of the fastest-acting, most excellent sources of nitrogen, phosphorous, potassium and trace elements for plants, delivered in a form that’s perfect for assimilation. The average person flushes 40 litres of water down the loo everyday. Take also, the flushing, soaking up and sanitising of menstrual blood, which is a woman’s gift back to the land, the creative lifeblood. There is nothing as intimate in the garden as sharing your blood with the plants, and watching them thrive. It is part of our relationship to the land. When we talk about the legacies of civilisation, we often talk about sanitation – where would we be without it? But are we really so creatively and technologically inept that we rely on an archaic sewage pipe system invented in 1865? Of course, it was a great invention, and it served to sanitise the exponentially expanding city populations, thankfully transforming the Thames back from the open sewer that it had become. However, is sea-runoff and industrial chemical sewage treatment still the answer? Could we instead be running giant bio-digesters, creating rich compost to feed urban growing projects? What about natural wetland bio-filters instead of industrial treatment plants? Could we build compost toilets in our gardens as an option so that we aren’t so completely reliant on the sewage system? If we can take responsibility for our personal waste, we can create effective, safe, hygienic solutions, instead of acting like infants relying on outmoded, “civilized” models to change our dirty nappies. 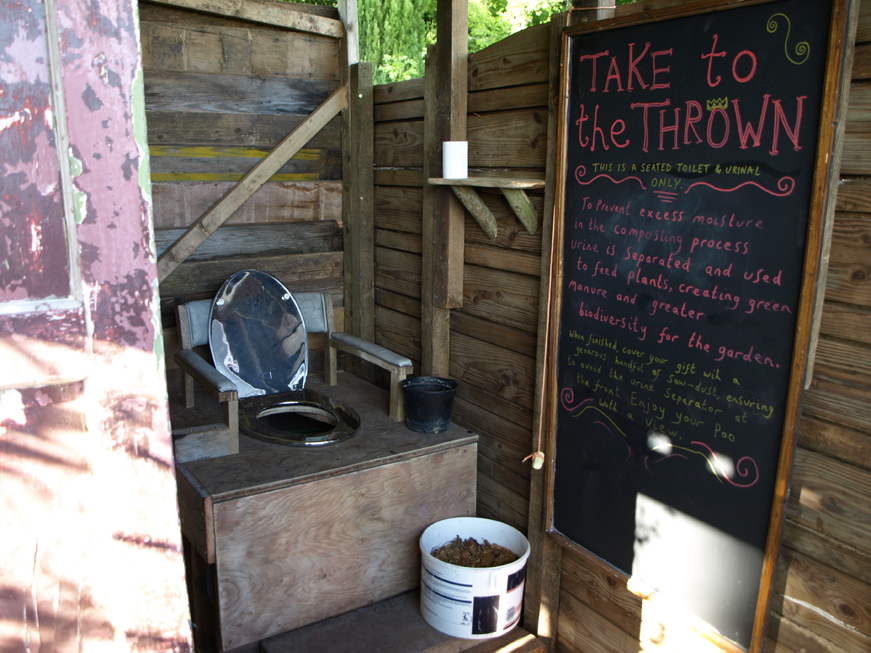 Whether it’s how we dispose of our human waste, our domestic waste, commercial or industrial waste – nothing ever simply “disappears”. We have a responsibility to treat the waste with the respect it deserves, to consider it’s role in the cycle of life, to understand it in relationship to, and not separation from us, and our home, planet earth.