On a glorious May day, we watch the sun set over a poplar-studded vista of lake and rolling hills. Surrounded by 88 acres of woodland where car tyres, old fridges, tipis and abundant wild flowers, herbs and ancient oaks all live together in a bizarre alchemy of worlds. 35 volunteers carry old mattresses, TV monitors and wheel barrows spilling over with couch grass, shifting, moving and transforming a space, Bodenham Manor, which this month, is the home of Building Man. 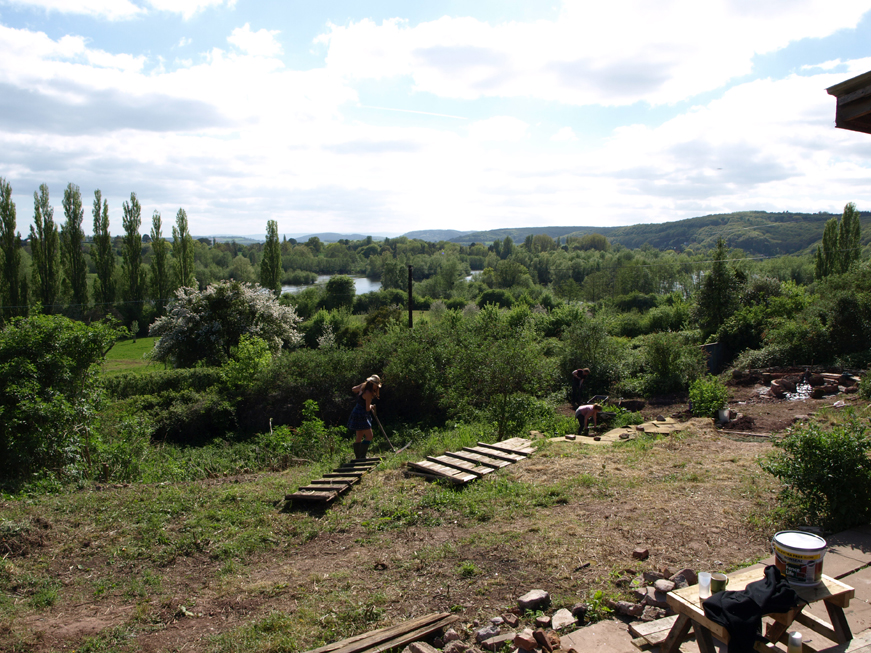 Building Man is all about collaboration, and co-operation. The people here have come together to offer their time and skills to support the community of Bodenham Mannor and the surrounding area. The vision is to create a multi-use educational facility where permaculture, healing, growing, storytelling, ceremony and performing arts will help to empower both volunteers and Bodenham Mannor’s emerging community through a “boundlessly creative process of re-imagination and re-building.”

The land, which has seen everything from scrap metal, to livestock, to quadbike tracks and paintballing had fallen into a state of neglect. There is a lot of work to be done, and the people of Building Man have been here since the beginning of May, working to develop and execute a vison, working directly with the communities who live on the site – a combination of residents of flats in the main building, van dwellers, static caravan, tipi and cob-house dwellers.

Buildingman is “a network of people and projects growing together organically through the co-creation of a shared vision; to collectively build the change we want to see in the world.”

The name is a play-on-words, taken from the American arts festival, Burning Man, which takes place every year in the Nevada Desert. This spontaneous community of over 48,000 active citizens in a temporary, barter-based, ecofriendly community, which embraces radical self-expression (installation art is encouraged) and self-reliance, establishes infastructure and dissapears within the space of a week, leaving no trace. Conversly, the vision for Building Man is about leaving a sustainable ecological legacy that can encourage continued community engagement. Nonetheless, I must admit my feminist skin prickles a little at the name. Of course, they are not only referring to men, and in explanation, simply brought it back to the play on words with Burning Man (which is rooted in the pagan ritual of burning an efigy of a “man”).  Whilst I totally understand and support the concept, I feel the macho and exclusive tone of the name invites a bigger discussion. What are the implications of perpetuatiing such male-dominated terms? What does it say about how we see the world? Could we instead be Building Beings?

That said, I get the concept, and agree with Josef (uniteddiversity), that to build healthy, sustainable creative communities with as little environmental impact as possible, we need to create infastructure to support the process. His argument that every year the festival season transports swathes of people, rigs, vehicles, resources and materials accross the country, only to be packed up and taken away again is somewhat counter-productive, even destructive. Even if we leave “no trace” there is an impact on the land, the community of living beings that inhabit that area, and on the atmosphere. What could be possible is we aspired instead toward building a more permanent culture?